St Giles House, in the beautiful Dorset village of Wimborne St Giles, is simply one of my absolute favourite venues for wedding photography. As a luxury wedding venue which is filled with timeless elegance, the house is simply stunning, the grounds and gardens are gorgeous, and above all the light is incredible. The way St Giles House has been restored, keeping faithful to the tones and colours of the original paintwork is just sublime, and it is a wedding venue like no other, filled with character.

As a Wimborne based wedding photographer, I am very local to the venue and know it well, and it suits my style of photography perfectly, as I look to make the most of reflected natural light, sumptuous gardens, wild flower meadows, and warm Dorset sunsets.

Nestled deep in the Dorset countryside, St Giles House is a truly incredible place with a fascinating history, the ancestral home of the Earl of Shaftesbury which has been lovingly restored back to it’s former glory.

Stepping back in time

To step in to the grounds of St Giles House, and explore the building is to step back in time – partially derelict until a few years ago, rather than rebuilding, every detail has been painstakingly restored, including the original paint and wallpaper, revealing gorgeous warm tones, and history wherever you look – it is a photographers paradise. The light is incredible, and I love this place, only a stones throw from my own home.

Bridal preparations usually take place in the Japan room, with original wallpaper, and doors which are not quite straight, but work perfectly, there is quirkiness wherever you look. The main staircase features old photos of Lady Shaftesbury, and as a bride walks down the stairs, there is an incredible sense of timelessness, as she blends in to the surroundings like a work of art. 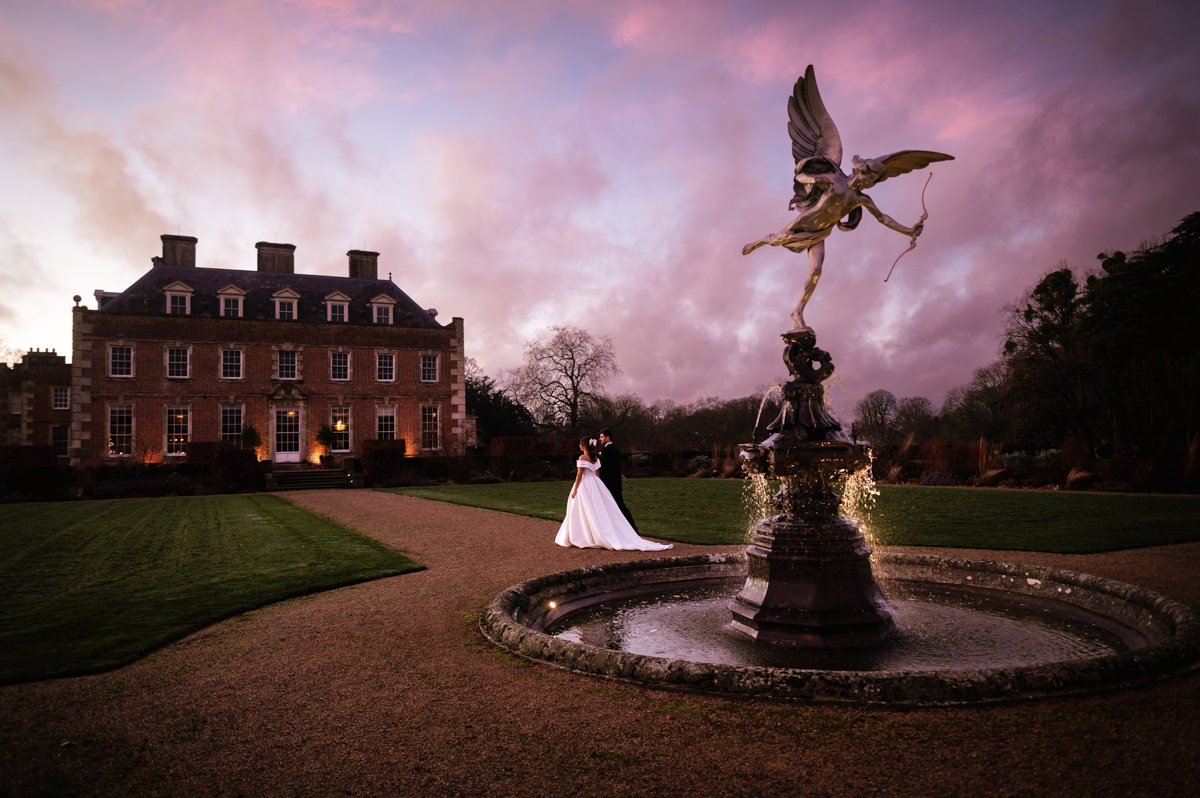 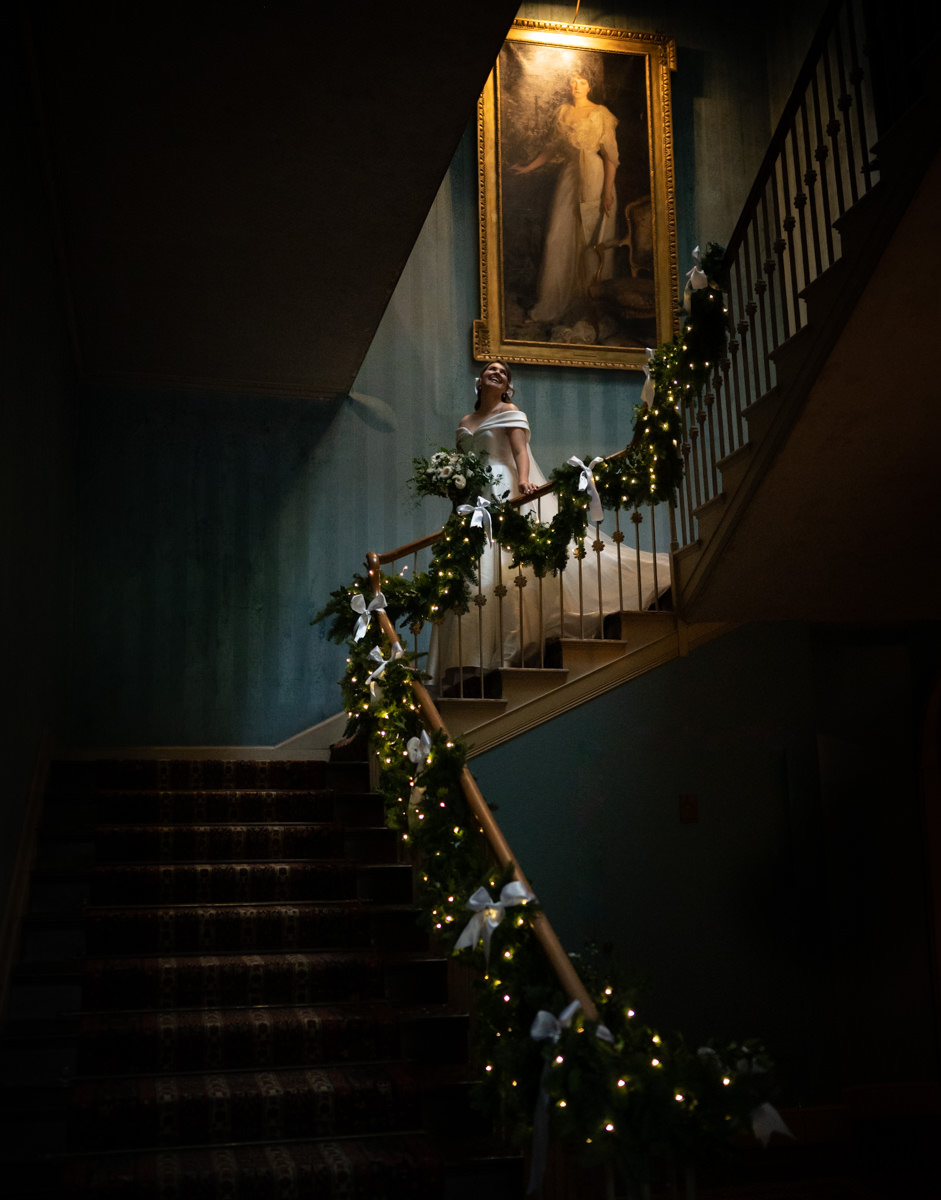 As the sun begins to set, there are endless opportunities to wander round the gardens, which change beautifully through the seasons, with purple and white Alliums in spring, through the incredible summer wildflower meadows which surround the hosue, to the magnificent colours of the bech avenue in autumn. There is magnificent light in the 18th century shell lined grotto, and of course the the statue of Eros standing proudly. As night falls, you descend in to another world, with the ‘rave cave’, or underground dance floor, created by the Earl of Shaftesbury himself, as an established DJ, making his own mark upon St Giles House. The cellar has to be seen to be believed, with strips of light that draws you mesmerizingly into the tunnel, and a party that cannot be heard, deep underground, while St Giles House sleeps above.

The history of St Giles House

To explore the history of St Giles House is fascinating, I love to wander around the house and gardens, and marvel at it’s place in time. The House was built in 1651 by the Ashley family, and included 400 acres of park, the local village of Wimborne St Giles and the beautiful church, a serpentine lake, the shell filled grotto, and a staggering 1000 yard avenue of beech trees. After the death of  Sir Anthony, and the establishment of the Asley Cooper family, the estate was then passed on to Sir Anthony Ashley’s grandson, Anthony Ashley Cooper, who became the first Earl of Shaftesbury.

The Earl of Shaftesbury became a powerful political figure, serving during the time of Oliver Cromwell, and King Charles I. In 1672, Lord Ashley was appointed as Lord Chancellor of England by King Charles II.

During World war I and II, St Giles House was used as a hospital and school respectively. In 1954, the running of the house became too onerous, and the family retreated to Wimborne St Giles village. In 1973 the Earl demolished a large part of the southwest wing and the Victorian towers. By 2001, the house had fallen in to great disrepair. In 2004, the 10th Earl Shaftesbury, Anthony Ashley-Cooper, was murdered in the Alps by his wife and brother-in-law. His son inherited the estate, but died shortly afterwards in 2005 at the age of 27.  The inheritance therefore passed to his younger brother, Nicholas Ashley-Cooper, who was living in New York and working as a successful DJ. He therefore returned to St Giles House to take over the estate, and the ongoing restoration of the estate through the stages we see now, began. It is fascinating to see the restoration in progress, with so much history being painstakingly preserved.

The Statue of Eros, and Shaftesbury Avenue

The 7th Earl of Shaftesbury became a great social reformer, and is honoured for his work with the Shaftesbury Memorial Fountain, more commonly (but mistakenly) known as the very familiar Statue of Eros in Piccadilly Circus in London, which stands at the head of the London theatre land Shaftesbury Avenue, also named after him.  The statue is actually of Anteros, the god of requited love, a symbol to the Earl of Shaftesbury’s love for the poor. The statue of Eros itself points towards Wimborne St Giles, from the heart of London. What was little known at the time however was that replica of this statue existed, made at the same time as the original, which was discovered in the cellar of St Giles House during restoration. This second statue now sits proudly in the gardens, pointing it’s arrow back towards the original in Piccadilly Circus.

Such history is fascinating to discover, and to step in to St Giles House and it’s incredible gardens, is a privelege on your wedding day, and it is fantastic to see this great historic and elegant house being used for the luxury weddings which are entirely in keeping with it’s history and character.

If you are getting married at the stunning St Giles House, and are looking for a wedding photographer, then please have a look through my portfolio, and drop me a line, I’d love to be back one day very soon at the incredible St Giles House!

A few links to several amazing local suppliers who I have worked with at St Giles House.

Florist – Martha and The Meadow

Hair and Make up – Farida Ghedwar