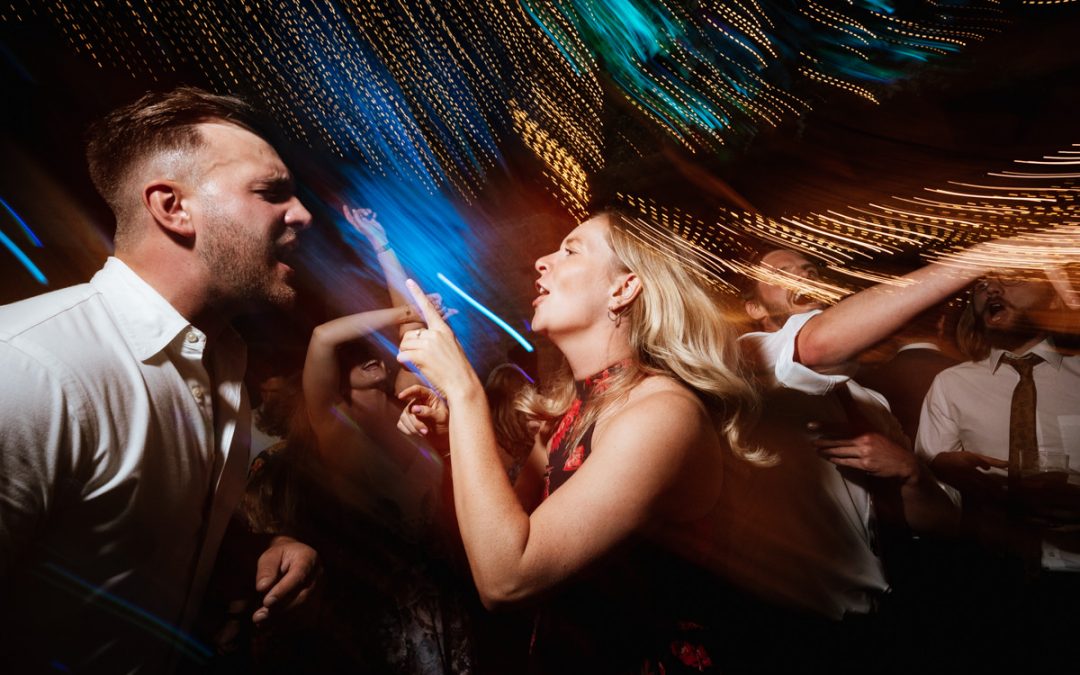 For many photographers moving from a DSLR to a mirrorless camera, there appears to be a noticeable difference in how well the autofocus performs in low light, and this is true, (and indeed the same for all mirrorless cameras regardless of brand) but with good reason. A DSLR has an autofocus sensor, which reads the distance to the subject via the mirror to give accurate results, which can be assisted with the af beam on a flash, the camera sensor is never involved in the focus process. A mirrorless camera however uses the camera sensor for focus (it has to do this as there is no mirror to redirect to a separate autofocus sensor), and this process works on contrast detection. This is great in most well lit situations, and performs incredibly well on the Nikon Z series cameras, but as light levels drop, a mirrorless camera will struggle to ‘see’ the contrast. This can then lead to ‘hunting’, which is slows you down when you have a rapid moment capture. There is a green af beam on the Z series cameras (the red infra red beam from flashguns doesn’t work with mirrorless, as the sensor can’t ‘see’ infra red), however this is stil not quite as rapid as focus in brightly lit situations.

So, a simple work around to avoid any autofocus difficulties is not to focus at all, which then frees you up to get creative. Sounds simple, and actually, it is!

This approach works on an understanding of depth of field, coupled with a set way of working, whereby your subject is 1-2 metres away, which covers most dancefloor situations. With focus set manually to the correct distance, at the right aperture you will have a great depth of field across the frame, meaning the subject will always be in focus even if they aren’t right on the actual focus point, as well as an providing an area behind and in front of them which is in focus, so sharp images all round.

The trick is then to balance your exposure to get the result you need, with a little compromise here and there. For example, f16 will give you the greatest depth of field, but will require a higher ISO, and therefore greater noise. Flash sync shutter speeds of 1/200 will freeze the action, but will also require a higher ISO, or wider aperture to compensate. Using off (or on) camera flash, it is possible to freeze the action with the flash itself, which means you can use much slower shutter speeds, which allow both a lower ISO, and also some great shutter drag effects as you wish. Moving the camera during exposure allows you to ‘paint’ with the available light , and if this isn’t your thing, then you just keep the camera still. 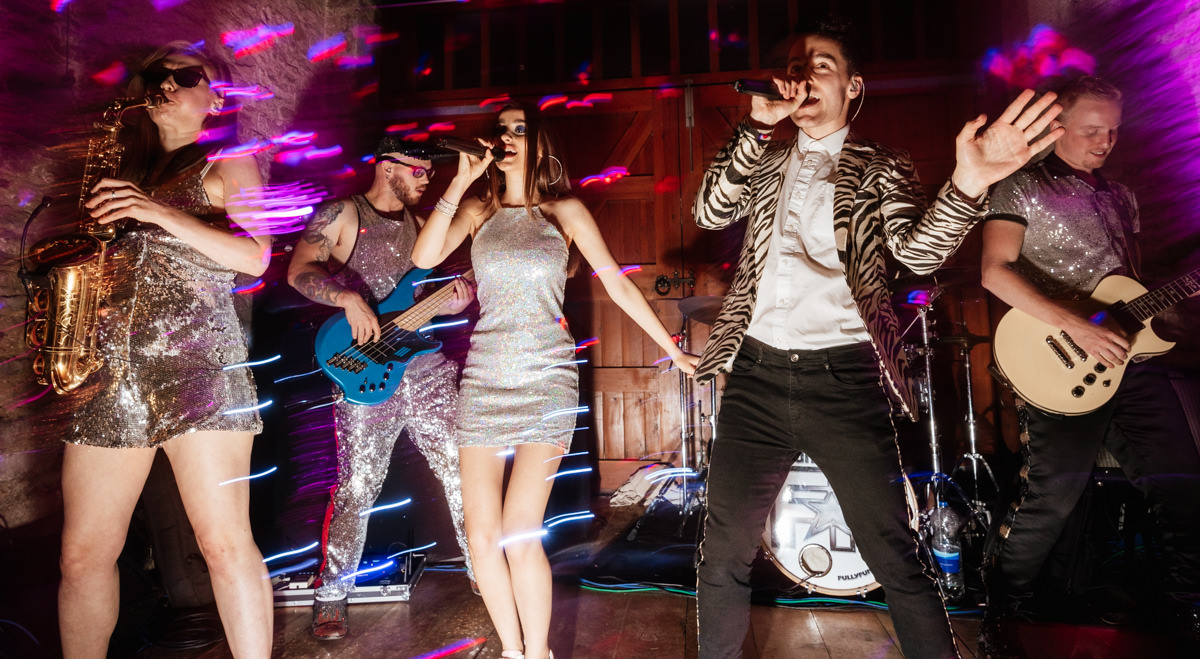 I’m using the Nikon Z6ii, with Z series 14-30s lens, which I use between 14-24mm, mostly 20mm as the starting point. I like to get close to the action, which is what this method was designed for. It also works with the 24mm prime lens too, indeed any wide angle lens. Shooting at longer focal lengths would require a different set up, as the subject will be further away, and therefore need more flash power, or flashes on stands, which I’ll cover in another post.

I wanted to find a way of working that would be standard for every wedding, rather than checking the light, and making settings for that situation each time, and never remembering any of it. I wanted to have a ‘go to’ which I could save to one of the user modes, dial in and use at any wedding, or any low light situation, and at last I’ve found a sweet spot I’m really happy with. And the best thing is, it’s really easy to remember, just set everything to 10!

Yes that’s right, 10. In some ways this was a happy coincidence, but I also wanted it to be memorable too, and this just works.

Here are the settings;

And that’s it. Easy to remember! 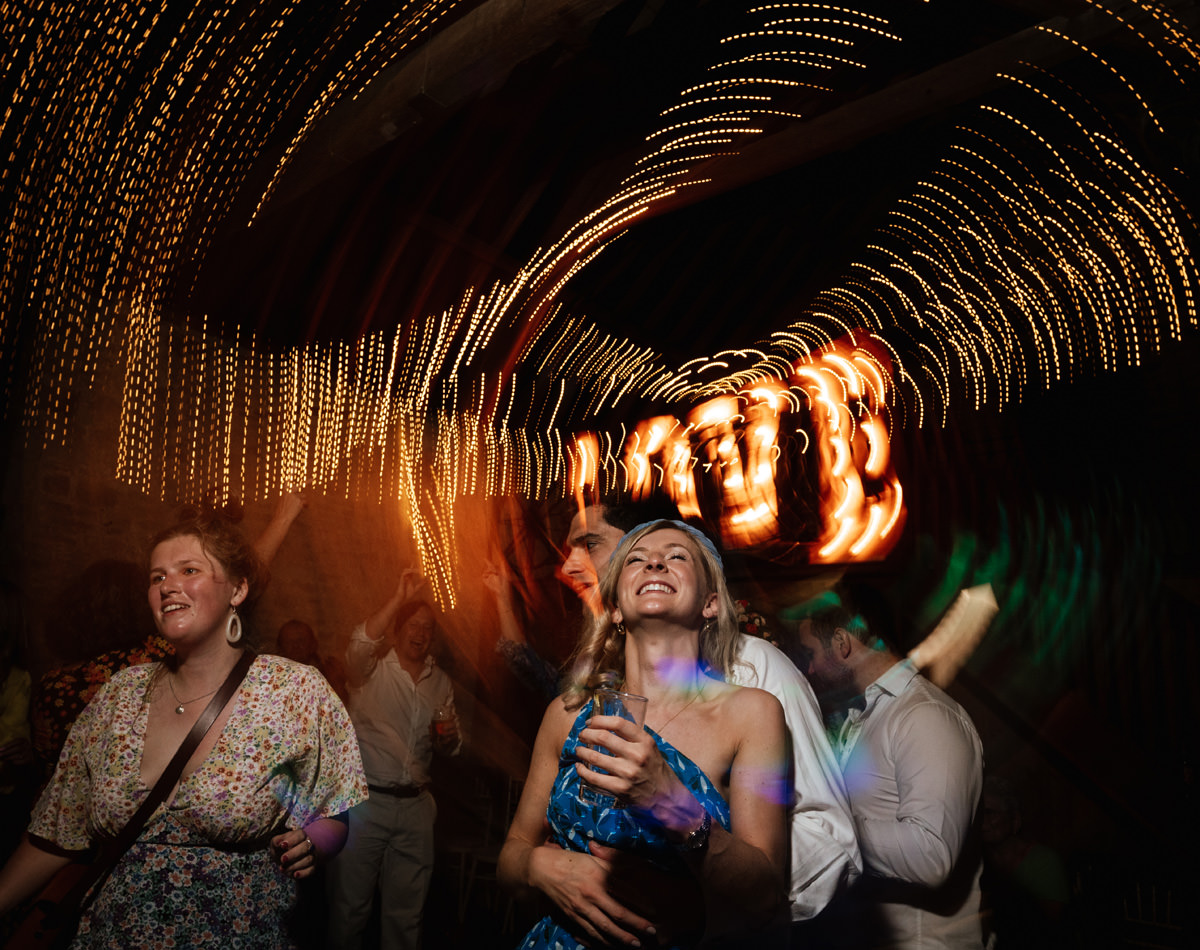 Focusing on the subjects

I Set focus to manual mode, with peaking set to on (Menu item d10 in the custom settings on the Nikon Z6ii). This gives you a little red ‘rangefinder’ box, which I set to the middle of the frame, and leave there. The rangefinder is always active in manual mode, and changes green when whatever is in the box is in focus. I then set focus to exactly the midway between point between infinity and the flower symbol on the focus scale, which is my sweet spot based on how far away I tend to be from people. You can set your own by using the rangefinder, and when it turns green, that is your focus point confirmed. Everything you want to be in focus will then show up with the peaking highlights.  Simply work out how far you tend to shoot from your subjects, focus, then measure the distance, and note where the focus point is on the manual focus scale on screen. This will be your sweet spot, but a few centimetres either side don’t really matter, because the of the depth of field.. Another simple way to check the focus is still set correctly (for me anyway!) is to focus on my feet, as these are always the same distance away from my eyes! 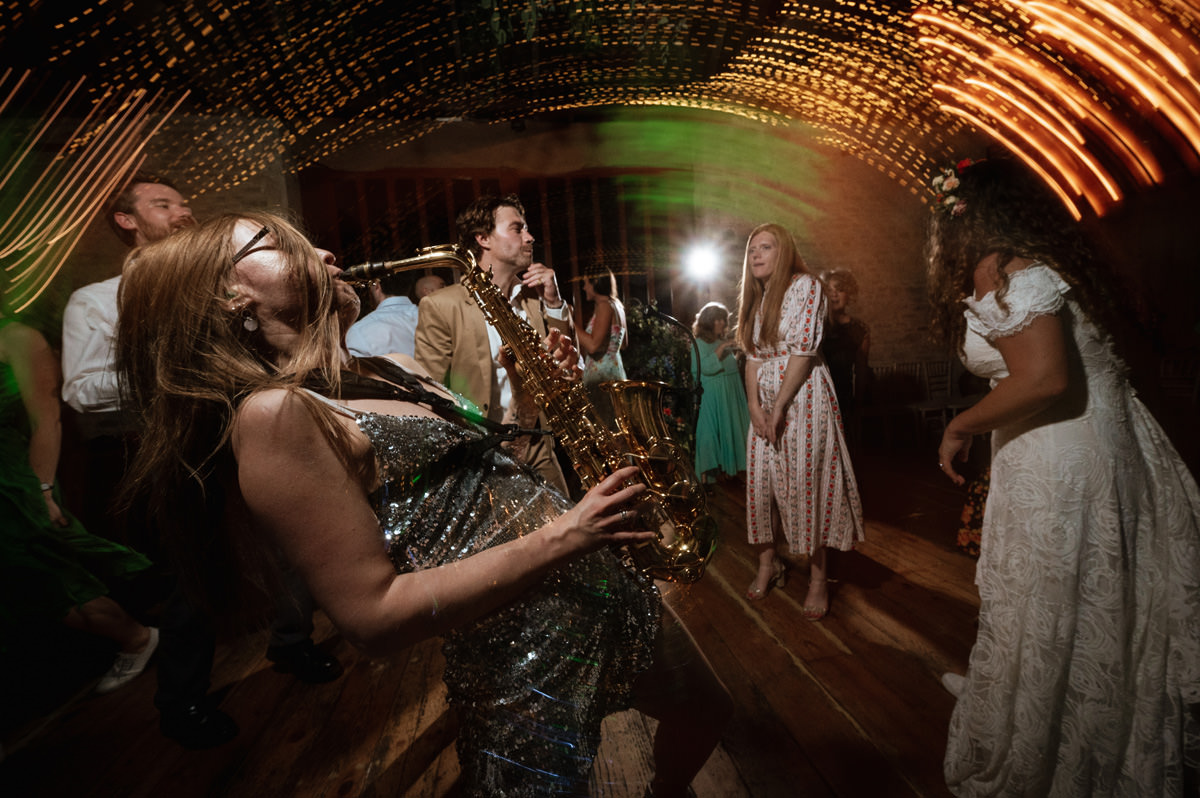 1/10 second shutter sppeed, with the motion in the lights showing the rotational camera movment. It is the flash which freezes the action, not the shutter speed.

I’ve recently switched from using on camera flash to off-camera flash, for three reasons. Firstly, having the flash off camera allows you to light form much more flattering angles, with nice shadows, which I feel give images the edge of your standard point-and-shoot camera which lights directly.  Secondly, without a flash on top, the camera is much lighter, and I can share the load between two hands.  This makes it much easier to hold both the camera and flash at arm’s length to get both amongst the action, without you needing to enter the melee. And thirdly, when people look at you for the photos, they are not getting that bright horrible direct flash in their eyes. This might not matter for one or two shots, but when you shoot hundreds or thousands on the dance floor, it can get a little wearing.

My set up consists of a Godox V350N flash, triggered by a Godox Xpro trigger. The flash is then held firmly in place with a Magshoe grip (which I have found better than the flimsy Godox ones as the flash can’t come loose, which is important when holding it above heads). I then have a short monopod on the base of this, with the magbounce on top of the flash, to provide a much softer and less intimidating light. The monopod acts as a pole to get the flash closer to where you want it, and then if I need to put the flash down to side light a photo, I simply swap the pole for a Pixi minipod. The whole set up can then clip on to a Spider Monkey clip on my belt to allow me to park it when I need to.

The Magbounce  does soften the light, so this is why I am able to use 1/8 power, if you arent using a modifier you may need to drop the flash power to 1/16 if it is too bright.

The Godox V350N is a really light flash – it may lack the power of the larger models, but remember, as you are shooting subjects that are close, you don’t need a high powered flash. The recycle time is incredible, because it is a lower powered flash, even at 1/8 it doesn’t skip a beat, firing every frame without fail on continuous low release. It is worth having a spare battery with you though, as shooting this way the flash wil run flat after 1000 frames or so.

Ultimately though, I built this set up form existing equipment, there wil be many different ways of achieveing the same results with different equipment.

I’ve also started firing shots in time to the music, this seems to make it much less intrusive and in some ways adds to the action, with a beat matched strobe! You can also blame it on the DJ then…. 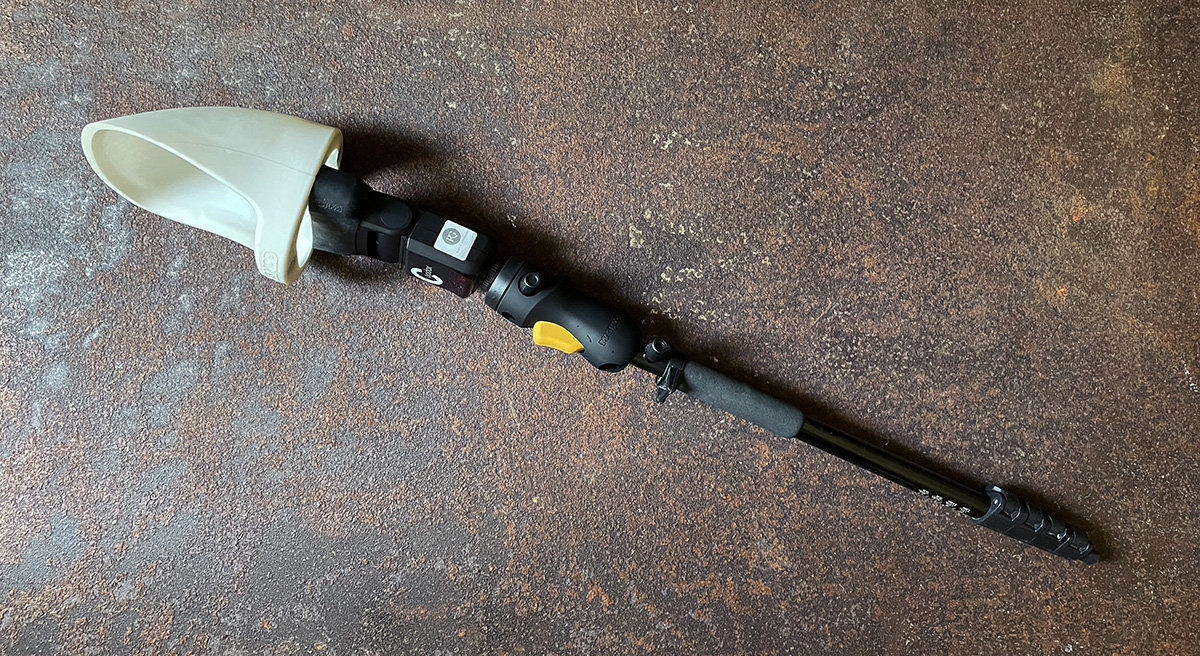 Getting the most out of the set up

The hit rate with this set up is so good, I find it pretty hard to not get focus, as the settings are always the same. It is really quite liberating, as thinking about focus becomes much less of an issue, and you can concentrate on getting creative, and also have the confidence to point the camera somewhere without checking the screen, knowing the shots will be in focus.

Once set up, I don’t change camera settings at all, and for me it works consistently well for all low light situations, at any wedding. Even those moments where a few people ask for a quick photo, or something interesting happens elsewehere at the wedding, the set up works everywhere where you are photographing people up close in small groups. It is important though to understand how everything works together, so if you need to adjust soemthing for your tastes or needs, you know what to adjust. It is the flash, not the shutter speed that freezes the motion, so if there is blurring of the subject, increase the flash power, rather than the shutter speed. Increasing the shutter speed reduces the background illumination, and potentially the shutter drag effects, but you can also reduce shutter drag by moving the camera less. Increase the aperture for greater depth of field, and you will have to bump up the ISO too. This is why I love the rule of 10, because it removes all the thinking!

I have this system set to User mode U3, so I can go to it really quickly. This also saves the manual focus mode settings. 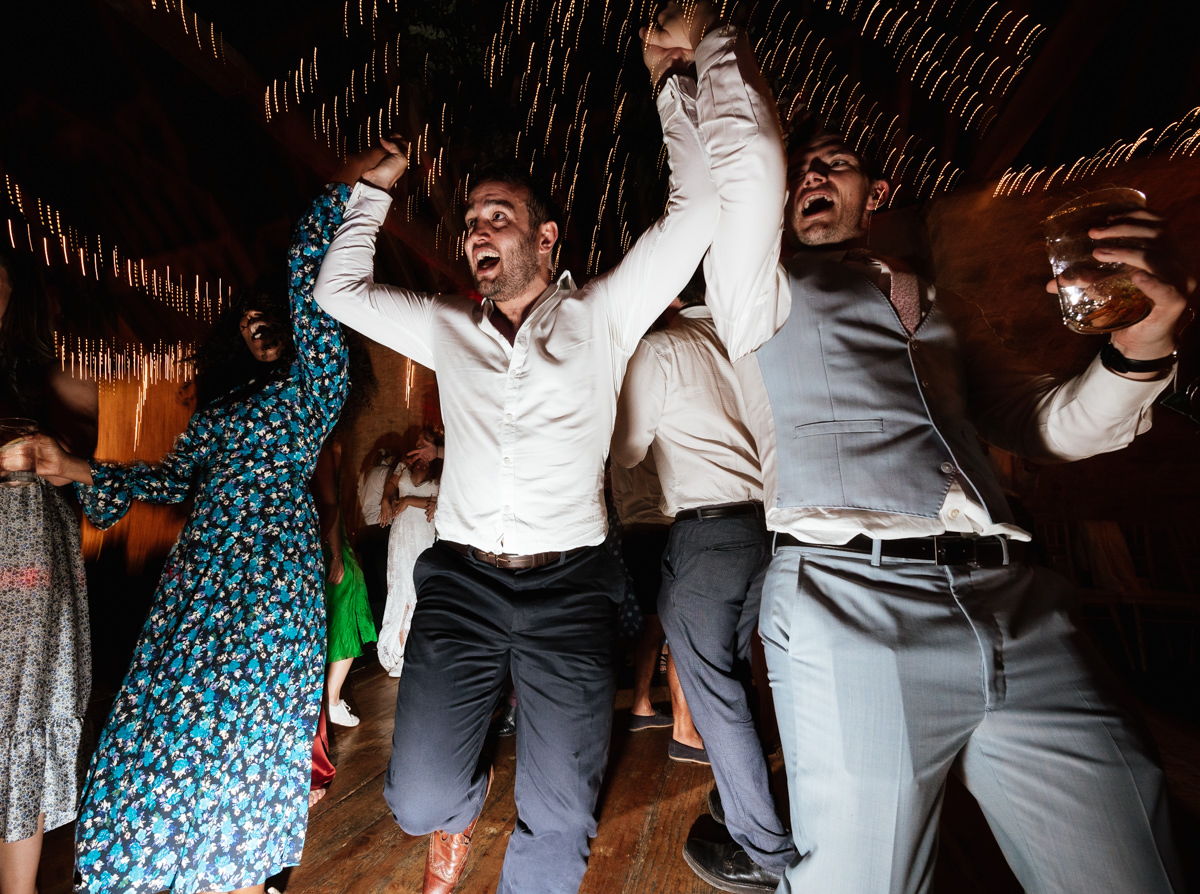 Using the flash low for uplighting to mix things up a little!

Not just for the dancefloor!

The set up also works great in any dark setting, for random quick grab shots as you need. Did they forget to do confetti then decide to throw it last minute in the dark instead, giving you 30 seconds warning? No problem, you got this! 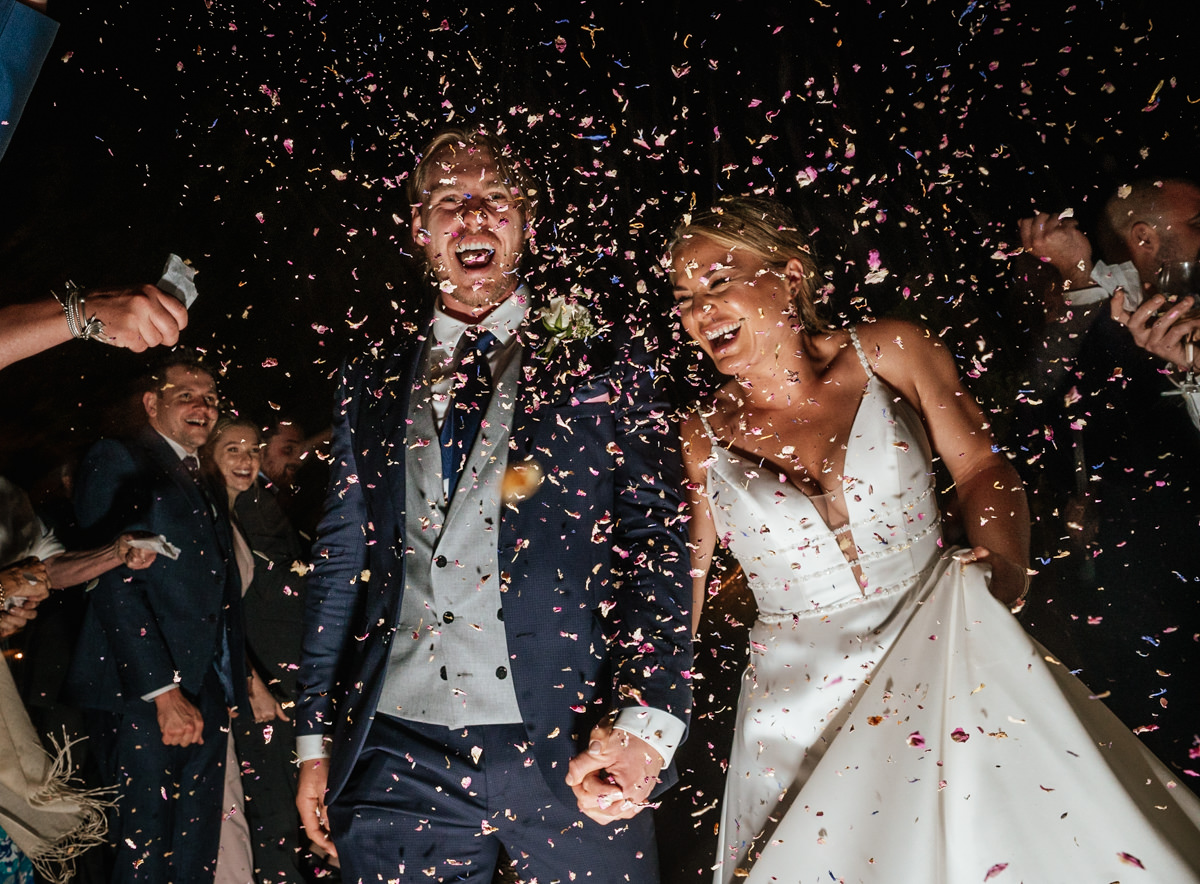 Once you have mastered the basics, and have the set up working consistently, you can get creative by rotating the camera with your wrist for rotational blur of the background,  zooming with the lens for a zoom effect, and changing the position of the flash for more dramatic effects, such as lighting from the ground upwards. The beauty of a wedding dancefloor is that once you have a good selection of images in the bag, you can then get creative and play to your hearts content, and further your knowledge, all while working.

I hope this helps, if anyone has any suggestions or comments on things that might make things better, or if things aren’t quite working for you, I’d love to hear them. 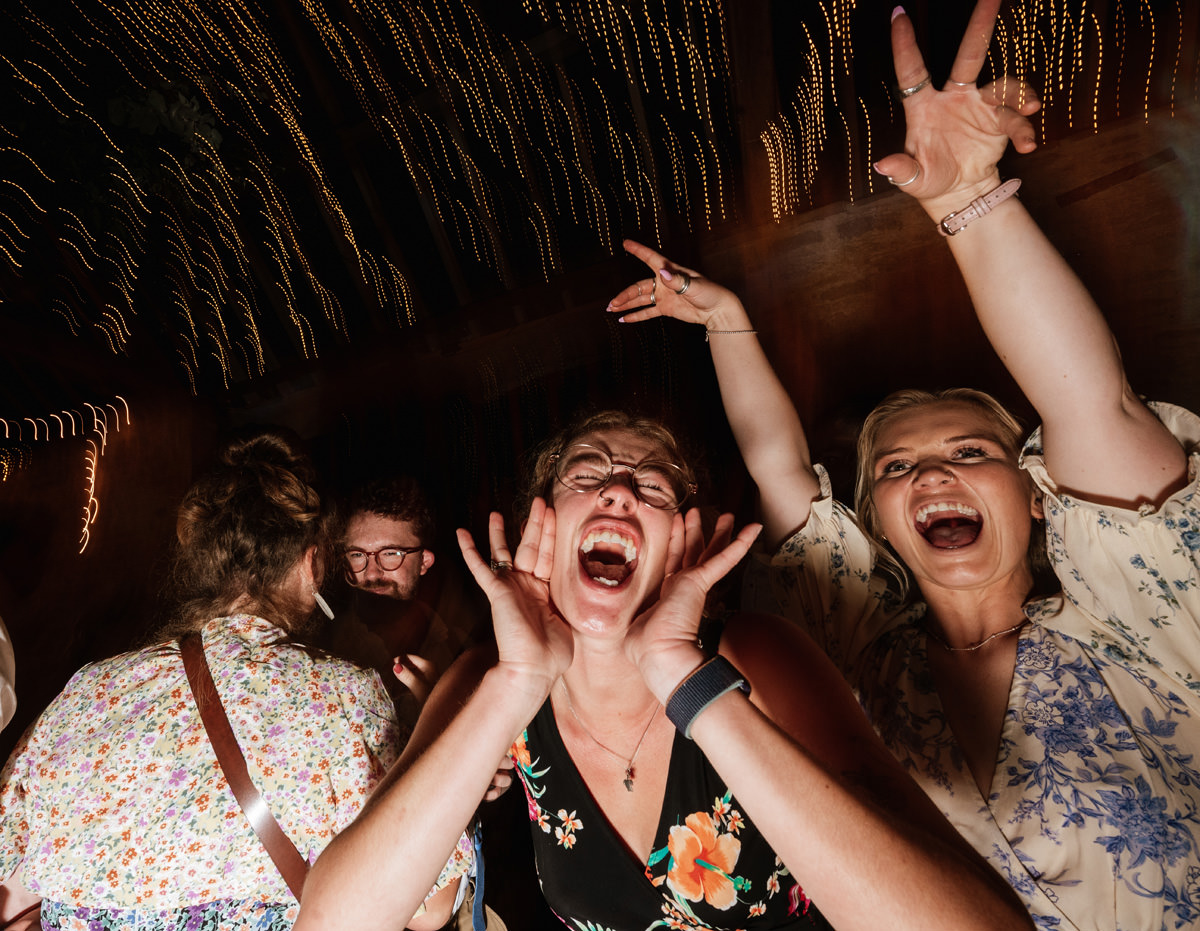