L Brackets for The Nikon Z6ii and Z7ii cameras for wedding, commercial and landscape photographers 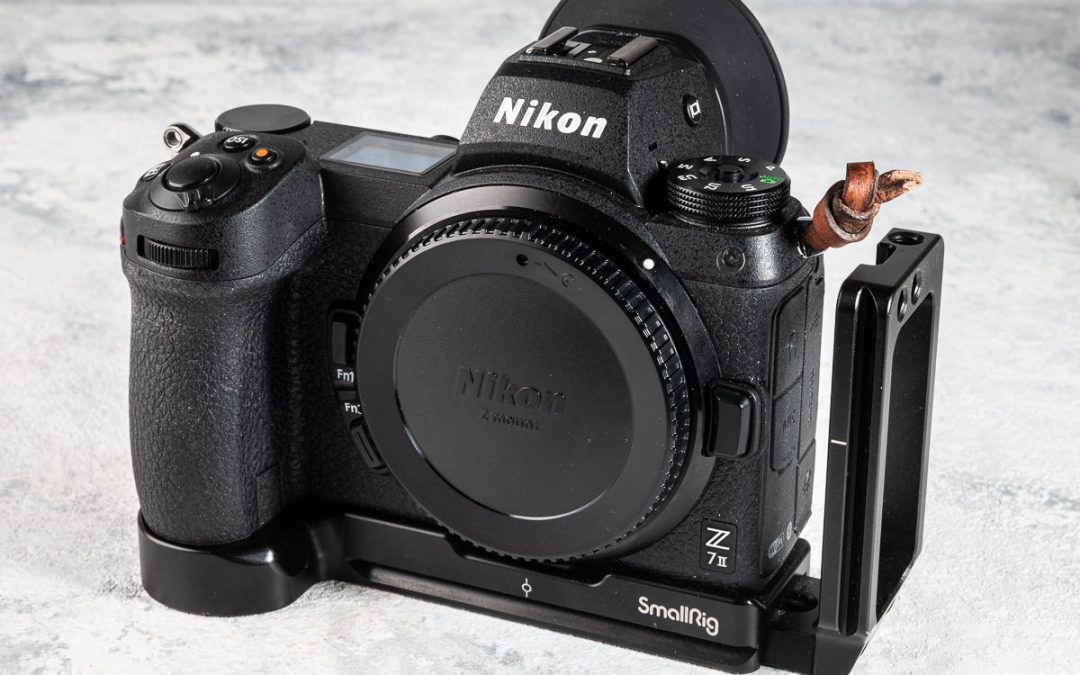 So what is an L bracket (also known as an L-plate), and why do I even need one for my Nikon z6ii or Z7ii?

Although I only discovered them through my landscape and commercial work which requires continuous tripod use, nowadays I never shoot a wedding without an L-bracket firmly and continuously fitted to my Nikon Z series, and it has become an integral part of the camera, and I will explain why.

I’ve spent quite a bit of time trying to find the perfect one that’s right for my photography needs. When I started looking, I had no idea it would be like trying to find a snowflake in the desert to find a variety of good L-bracket options in the UK, hopefully this will change as the cameras become more firmly established, (though the z6 has been around over 2 years the time of writing) and I will keep updating this post as and when they do.

Firstly there is the obvious reason, which means being able to quickly attaching the camera to an Arca-Swiss plate equipped tripod in either landscape or portrait aspects, and I often do this at weddings, usually with a low light time exposure to finish. And that’s the time not to be hunting around for a tripod mount. I also use a tripod regularly for my food, commercial and landscape work. It therefore makes sense for me that it is always attached to the camera. The L-bracket has the distinct advantage over a standard tripod mount as it allows you to mount the camera in the portrait format with the camera directly over the centre of the tripod, as well as fixing at ground level.

Secondly, an L-bracket offers protection from bumps against walls and the like, especially if the camera is worn on the left side with spider or Holdfast type holsters, and it also helps protect wear and polishing over a long days shoot, which helps maintain the value of the camera. After 3 years use at weddings my Nikon D850’s were not a pretty sight, with rub wear on the corners right through to the plastic and aluminium. The L-bracket massively reduces this wear, and when I rest the camera at a wedding it is always on the portrait edge of the plate and the lens hood, both sacrificial parts. If I drop it, there is a possibility the plate will take the brunt, rather than the camera, and I know which I would rather replace. 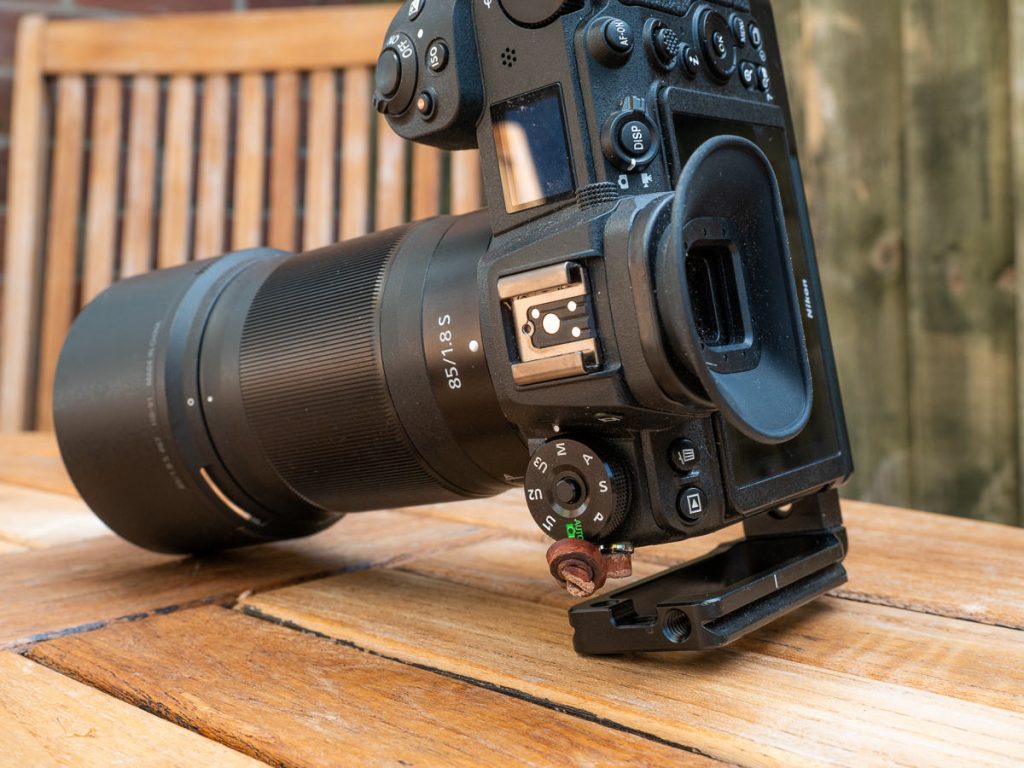 Thirdly, whilst smaller cameras are great, there is less to hold on to, and with the body of the Nikon Z series being very narrow on the left, I find changing lenses tricky as there isn’t as much to hold on to, and you can’t help touching the screen.  There is also more chance of dropping the camera in the heat of a quick lens change. With an L-Bracket fitted and slightly extended out, you have a firm handle to grip, and it is also really useful for grabbing the camera from the spider holster. Lens changes with an L-bracket are a cinch, and so much safer and secure. I find myself carrying the camera with my left hand this way quite a lot, it is solid, and allows you to rest your right hand too. You can also carry two cameras at once if you need to this way. 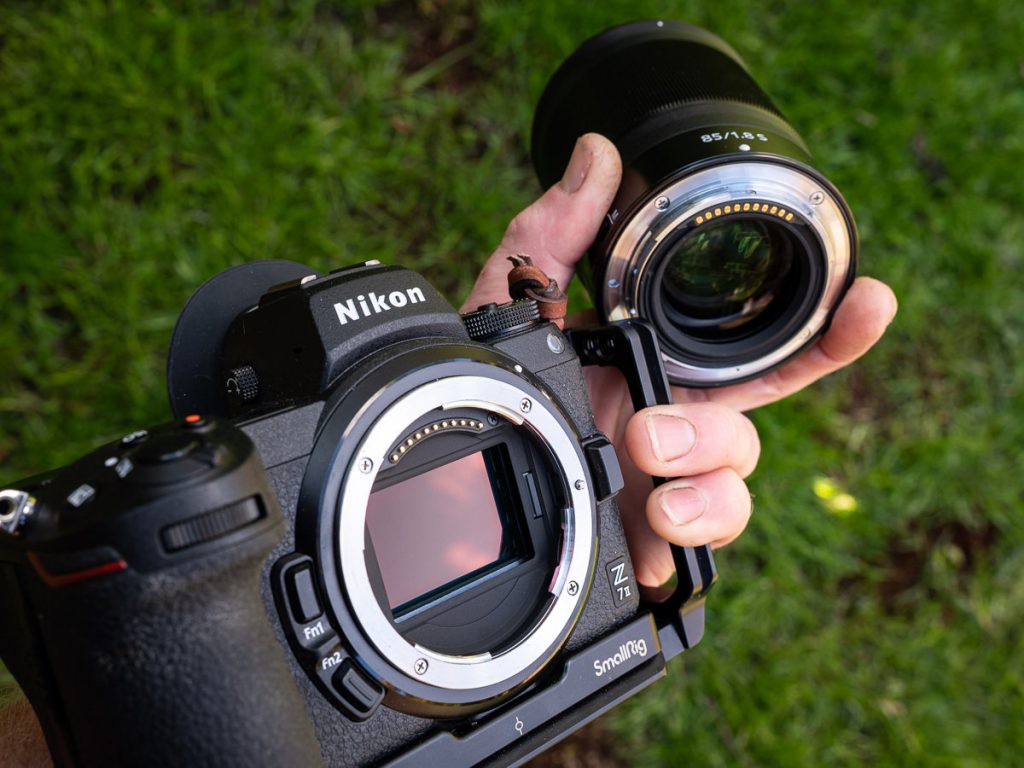 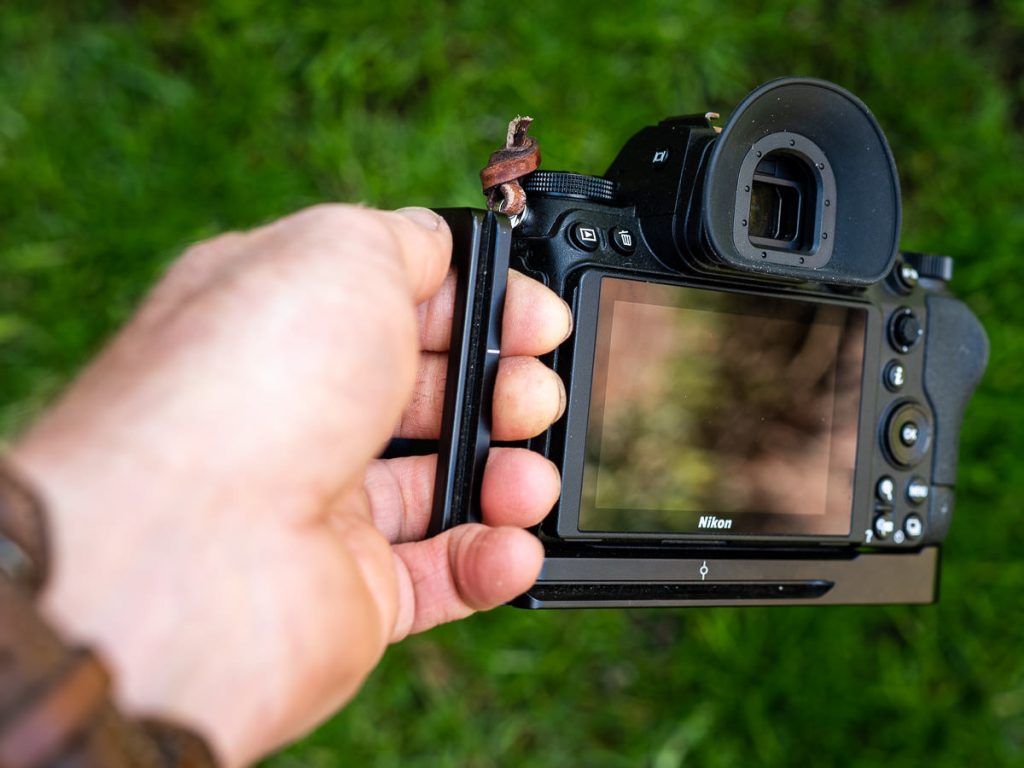 Some L plates can provide a grip extension over the battery chamber to provide extra support for your little finger. Initially I thought I need this as the grip was smaller than the D850 I was used to, but I have tiny hands, so this isn’t an issue for me, but again with cameras getting smaller, having space for all of your fingers can be an important factor which reduces hand fatigue on long shoots.

So, there are 4 reasons why an L-Bracket is a sound investment, so how to choose the right one? Frustratingly, no one makes a plate which is perfect in every way – some have features others don’t and vice versa, so there isn’t one that neccesarily has all of the features you might like (but of course if you have never tried an L-Bracket you might not know which features you may need. I would like So here’s a rundown, I purchased and trialled them all! 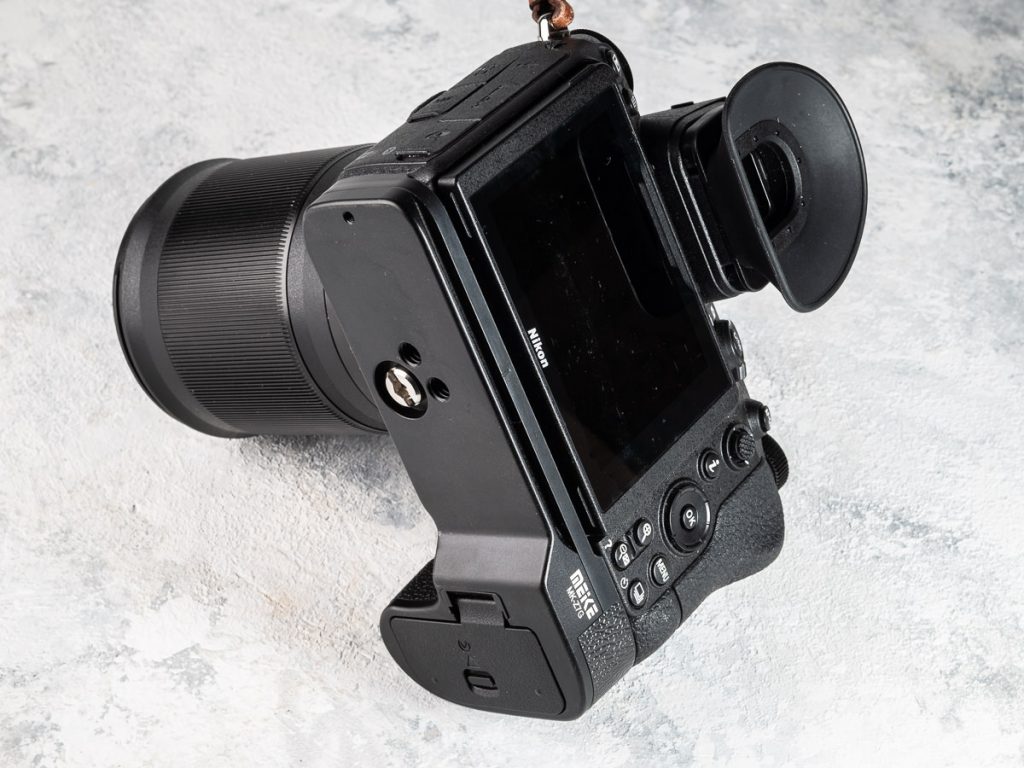 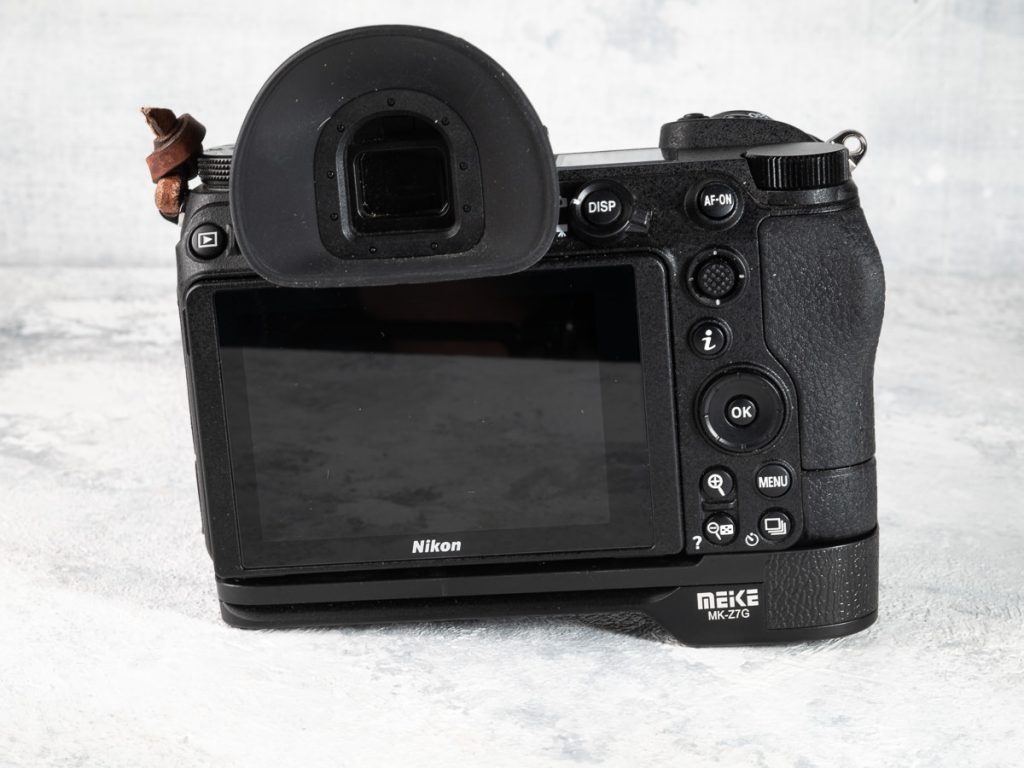 Technically this isn’t an L-bracket as it has no portrait end, but it is an Arca Swiss plate, and it is also a grip as it’s primary purpose. This one has the best grip extension, in that it matches the lines of the camera, so feels almost seamless. You do need to remove the battery chamber cover though and add it to the grip, this works, but I’m not sure how well weather sealed it is. The bottom tripod plate is recessed, so if you add a spider plate it sits level which is nice. The one thing that is missing though is the portrait plate, and no bolt holes to attach one, which means I don’t have protection here, I can’t see any reason why they didn’t add one. But if you just want an extended grip and ability to attach a tripod then this could be the one for you. 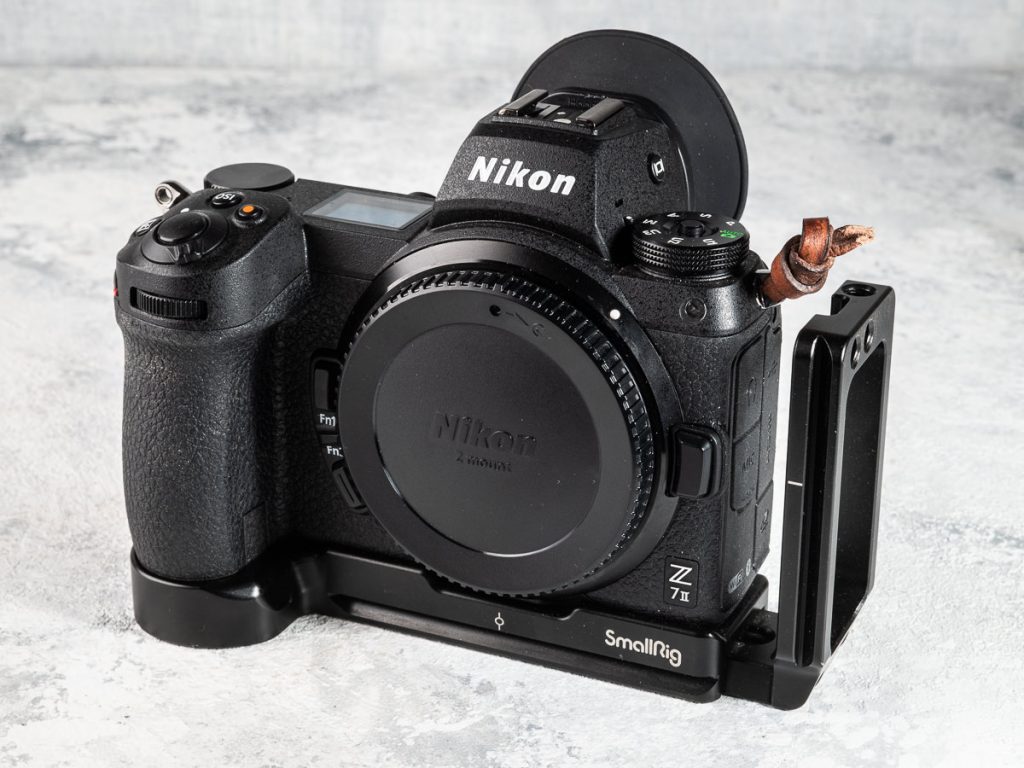 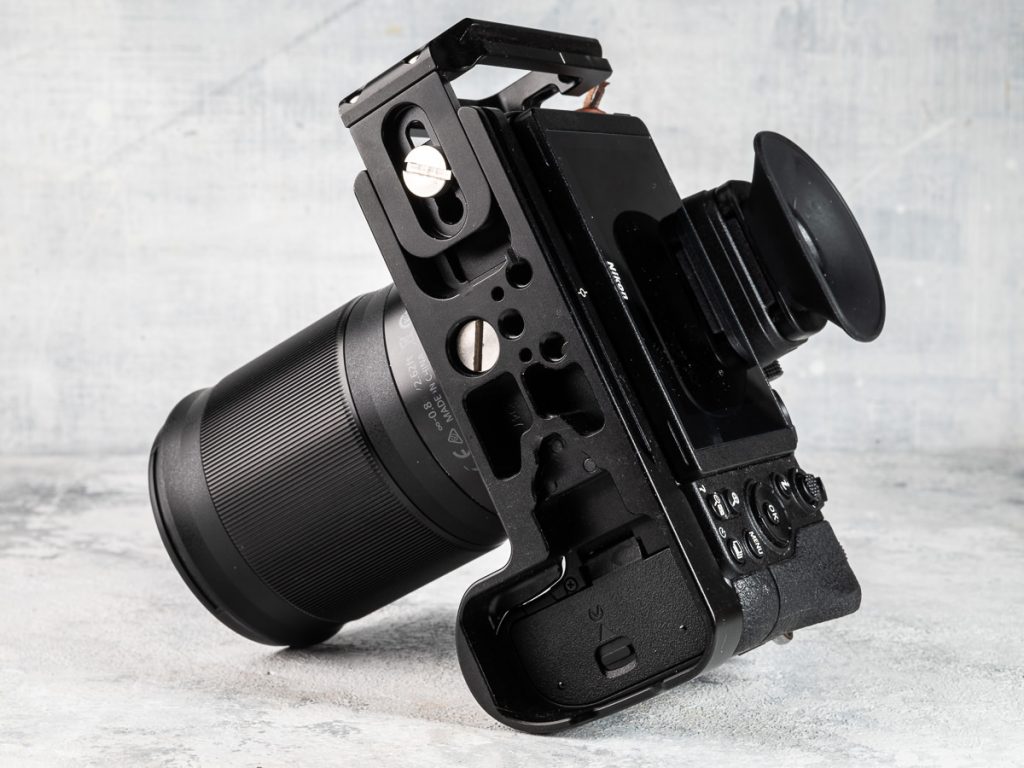 This one was good value, and I used it for quite a while in the absence of others. It is adjustable, and has a grip extension. The niggle for me though is that the grip extension sits proud as it has to to give clearance for the battery chamber to open. As it sits proud, I found it really annoying as my little finger felt out of place and I end up trying to squeeze all my fingers on to the camera grip. However, this grip extension also provides protection to the batery chamber corner too, which is great, so it depends what is importnat to you. It comes with a magnetic screwdriver for easy fitting rather than an Allen key, great until you lose it that is. They do make a larger and more expensive version which comes with an Allen key.

This is the most expensive (£234 from Photospecialist- that’s a lot for a piece of aluminium, I’d expect titanium for that price!). On paper it looks the best, with a grip extension that looks flush, and a QD socket as well (I like these for simple attachment of a safety lanyard when using a tripod for commercial stuff). When I tested Sony kit, this was by far the best designed plate out there. However, there is one massive deal breaker with the Nikon version, and it’s a howling oversight from RRS. With the plate attached, there is no thread mount to attach the spider holster, or holdfast, or indeed anything else, so I never got as far as testing this one, which is good, as my wallet is much happier! 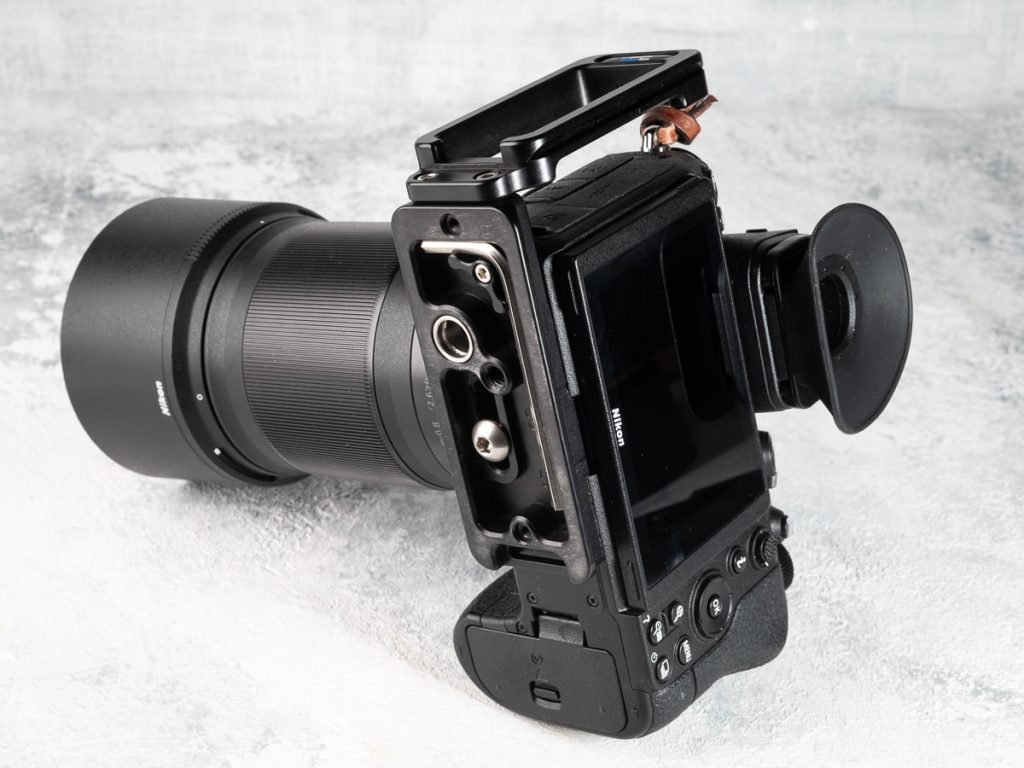 Kirk a a well known manufacturer of high quality equipment like RRS, so the quality is great. This one ticks most of the boxes for me, the sideways movement is adjustable to allow me to finely adjust the gap between the portrait plate and body to get my fingers in as a grip. The Spider Holster also covers the Allen key, meaning it is never likely to be lost if you need it. They are not easy to find in the UK though, and currently only supplied by Wex. It is also among the pricier models, retailing around £140. There is an earlier version which only fits the Z6 and Z7 which is a narrower camera, so make sure you get the correct one.

This isn’t a brand I had heard of, but from internet research it seemed to tick all of the boxes. The big drawback is finding one – I did eventually find one in Spain, bought it, and then it spent 6 weeks on hold with  UPS in Madrid, before being returned to the sender as it was too difficult to deliver to the UK due to Brexit complications. I was so close! However, I found one which is visually identical in design on eBay from China, (and as the Leofoto version is also made in China they could be one and the same). This one arrived quickly and works really well, indeed it pretty much ticks the boxes, and being so cheap I would have no issue replacing it if it got marked or damaged. There is a thought though at the back of your mind that if it is so cheap, is it likely to fail? Will the portrait bracket break? (It does flex a little, and I may well test it to destruction to see how strong it is). With all L-brackets the big issue is the integrity of the bolt itself – if it breaks you have two problems – a dropped camera, and a stuck bolt it may be impossible to remove. So there is an argument here that higher priced models are likely to use better quality materials.

I didn’t try this one because the portrait plate isn’t adjustable, however it looks like a well designed (even if it is bright orange!) and solid plate from a well known UK based designer of accessories. It has a 1/4inch thread mount for attaching straps etc which is great, unlike  the cheaper QR11 bracket, but then the latter is adjustable, proof you can’t always have everything you want in the one model!

Which one is right for you?

So now you know a little more, it wil lhopefully be easier to decide if an L-bracket is right for you. Like camera bags, and camera systems, everyone has their own preference for what works best for them. There are not as many L-Bracket options for the Nikon Z6ii and Z7ii as you might think currently available in the UK, but if you don’t need the extending portrait grip, then there may well be one that is perfect for you. For me, the Kirk one is the one to go for despite the higher price tag for overall features, build quality, resale value and feel. You certainly get what you pay for.

If you have experience of L-brackets or any questions about suitability, please feel free to comment below, I’ll be glad to help.